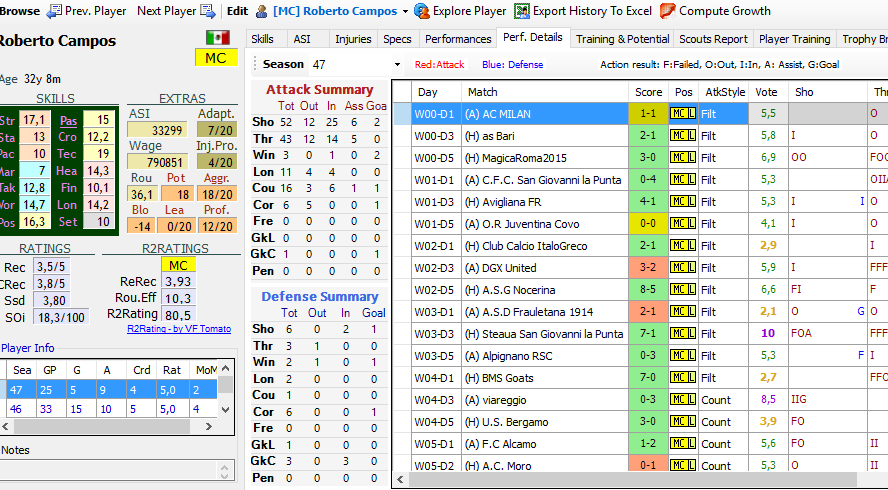 Well, this is one of the changes I thought long time ago, preparing the data structures I made for the Matches Analysis. Before slowing for long time the updates of the application (unless something extraordinary happens, like bugs or new features) because of a new big challenge for me (a baby is coming

), a really new and exciting feature is out.

You can find it in the Player’s History that you can access double clicking on the player’s row: the performances details are reported for each season and each match, reporting each action in which the player has took part, specifying if the action failed (F), if it resulted in a shot off (O), a shot in keeped by the goal keeper (I), an assist of the player (A) or a goal (G). If the player is the attacker, the letter is in red, if the defender the letter is in blue.

A summary of the season is on the left, helping you in judging how the player performs in the different types of actions.

It could be that the matches of the past are not fully analyzed (the assists haven’t been scanned properly in the past), maybe because an old version of TmRecorder. No fear, you can use the menu item of the main form Calc–>Rescan Matches for Player Actions.

Many thanks to Circo ~ III ~ Ratti for his support (a HUGE quantity of Pro days gifted to my team Atletico Granata), he’s now one of the supporter teams that you can see in the splash window of TmRecorder, now filled with picture of some of the biggest football players of the world.